Go back to All News

MEDENER representatives during the General Assembly

Today 18 April 2019, during the MEDENER General Assembly, Dr Dario Chello has handed MEDENER Presidency over to Dr Giorgio Graditi. Dr Graditi will ensure that ENEA will continue holding the MEDENER’s Presidency until the end of 2020. Here below, words and feelings expressed by Dr Chello in his farewell speech:

Thank you for participating in the meeting of the Board of Directors (BoD) and General Assembly today.

Perhaps, everybody is already aware that I am going to retire soon and that my time at work is running out: for this reason, today I shall resign as Chair of the MEDENER Association. I am very happy because MEDENER’s importance and visibility have been solidly acknowledged. Furthermore, I am glad because the new Chair – who has been appointed by the BoD of ENEA for the remaining time of the ENEA Presidency (lasting until the end of 2020) – has an in depth understanding of the matters, which are the core business of our Association.

Immediately after the lunch break, there will be the General assembly of MEDENER, which will endorse Dr Giorgio Graditi as the new Chair of MEDENER, whose appointment I strongly supported.

Now, without any delays, I would like to leave the floor to Dr Graditi in order to introduce himself and offer a brief preliminary overview of the mission he intends to pursue as the new President of MEDENER”. 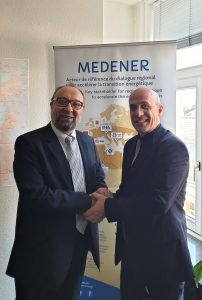